HUGE CHRISTMAS WAREHOUSE CLEARANCE SALE ~ SAVE UP TO 75% ~ WHEN ITS GONE ITS GONE!
Home Blog The World’s Best Christmas Light Displays

Despite the cultural and religious differences around the world, Christmas is still a large celebration in many different countries. Due to the cultural variations the festivities are displayed in widely varied ways. In more traditionally religious countries the focus remains on the birth of Christ and the symbols surrounding that idea. Elsewhere the concept of fun and giving is embraced with elaborate displays incorporating bright colours. Many countries put on spectacular display but here are a selection of some of the most impressive.

Hong Kong, known for it’s love of kitsch, is lit up at Christmas with displays full of bright colours and happy, childlike images. Shopping Malls compete to put on the best display and the Tsim Sha Tsui Chrismas lights are like a large scale version of the Blackpool illuminations, depicting Santa, snowmen, reindeer and presents on the side of buildings.

A perfect example of a chic and stylish display is that of Vienna, Austria. Swages and sashes of warm white lights illuminate the streets. Chandeliers and curtains highlight the way to St Stephens Cathedral, drawing tourists and locals in to the religious hub of the city.

In Kobe, Japan hand painted bulbs hang in the luminaire, donated by Italy after the earthquake of 1995. The beautiful bulbs are highlighted by the thousands of white lights, hung in the gothic-like structures. The energy to power the displays is generated from biomass to ensure they are eco-friendly.

Initially the display was only planned as a one off event to bring hope after the devastation of the earthquake but due to popularity this became an annual occurrence. 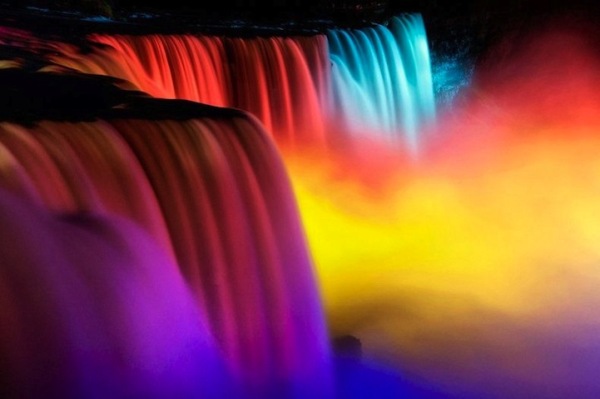 Oxford Street in London is well known for it’s elaborate seasonal displays, with hundreds of thousands of lights illuminating the way for the shoppers, hunting for the perfect Christmas gift. Giant decorations span the road, seeming to stretch out the width of London. Already synonymous with excess and elaborate decoration Disneyland of course ups it’s game even further at Christmas, the theme parks are swathed with what can only be estimated at millions of lights. The castle itself shimmers with icicle lights and everywhere is transformed into a true winter wonderland, albeit an entirely man-made one.

The Ion Orchard Shopping Mall in Singapore is a rainbow of colours at Christmas time. The shopping centre itself is adorned with lights and the addition of giant Christmas trees at the entrance really make it a spectacle to behold. Finally one of the most heart-warming sights is that of the traditional German Christmas Market. Rows of stalls appear in town squares and the smell of festive treats fills the air. Lights line the edge of the huts and a large tree in the centre, dispelling the winter gloom and filling even the most Scrooge-like with excitement.

Free DeliveryOn all orders over £50

As a first time visitor to our online shop we'd like to offer you an extra 5% off your first purchase.

Simply save this code and enter at the checkout:

Sign up to our Newsletter to receive further exclusive discounts and our latest offers.

You can unsubscribe at any time